After a couple weeks of the NSA-Edward Snowden clusterfuck, I’ve decided it’s time to put forth my view. I wanted to wait a while and see what developed, and the good thing is, every day brings a new pile of stink.

First, we hear that the National Security Agency has been snooping on our phone conversations, and we should all be COMPLETELY APPALLED! But wait, didn’t they decide all this was legal 12 years ago when they passed the Patriot Act (which I was adamantly against)?

So, that’s fine. I really don’t care that much that the NSA listens to be bitch about my job to my friends. No secrets there.

But then came to light this guy Edward Snowden, who leaked the NSA story in the first place. Suddenly, this guy is the hero for being a “whistleblower.”

I have so many problems with this, I don’t know where to begin. But I’ll try, in no particular order:

1. This guy was hired by a U.S. government contractor and was able to get a security clearance to have said job. Then he violated the clearance to “blow the whistle.” So many friends and family of mine have security clearance and actually take it seriously. My father, my boyfriend, my ex-husband and many friends see secure stuff every day and keep it to themselves. Not because they want to keep their mediocre pay, but because they’re Americans who love their country.

2. He was living in working in Hawaii and getting paid $200,000 a year. That’s more than four times what I make, and I have a college degree and more than 15 years of experience in my field. This knucklehead didn’t do shit. Believe me, for 200,000 bones a year, I’ll keep any secret you want! (Seriously, I’d keep any state secret anyway. See No. 1.) It really boils my poor-ass American potatoes to think of this colossal douchebag making that much scratch while the rest of us plug on with our broke lives.

3. He’s making himself out to be a martyr of free information. If that’s so, then come home and face the music. He was trotting the globe while journalists were playing “Where in the World is Snowden?” Hiding out like some persecuted martyr. If you’re that sure you’re doing the right thing, come back. Own it!

4. Now he’s admitted that he took the job to get the evidence of the NSA spying. That makes him even more of a snake. He’s not just an average joe who noticed something and had to speak up. He’s a conspiracy theorist (who just happened to be correct about his theory).

5. I do think spying on Americans’ cell phones is wrong. But I’ve always been a fan of the Fourth Amendment. That’s just how I roll.

6. He’s now hanging out in the Moscow airport unable to leave, whining about being a “man without a country” because the U.S. revoked his passport. He applied for asylum in Russia, but Putin said he would have to stop all his anti-American blather. Snowden wasn’t OK with that. I mean, did he really expect free speech … in RUSSIA? 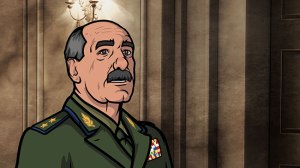 Nikolai Jackov of the KGB in “Archer,” the best spy (or any) show ever. Also, his voice is how I imagine Putin’s sounds.

Putin: So, Ed, I’d like to let you stay and be a friend of the Kremlin and all, but I need you to … how you say … shut the fuck up? I like to puff my chest out and all, but I really can’t afford a war with the U.S. Between you and me, it would end badly for us.

Snowden: No way, man! I’ve got truths to tell! They’re SPYING on their own citizens!

Putin: Uh … do they not normally? ‘Cause it’s pretty standard here in Mother Russia.

Snowden: WHAT? You don’t have freedom of speech here? I thought everybody did.

6. He’s applied for asylum in 21 countries so far. Ten of them have already rejected him. Others say the application isn’t valid because he’s not on their soil. His list is all over the map … literally. It makes sense to apply to Russia, Cuba and Venezuela. Those are all countries who hate the United States. But France, Germany and Italy? Really? Maybe he thinks we’re still in World War II or that France is still sore over that whole “Freedom Fries” incident.

But the one place that would probably welcome him with open arms is the one place he didn’t apply: North Korea. Go for it, Ed! You would be hailed as a hero there. You might never see the outside of the country ever again, but whatevs. You can say nice things about Dear Leader. Besides, you can go hang out with Joe Dresnok, the American guy who defected to North Korea. That guy is a North Korean celebrity, though also, kind of a moron. But lets be honest — Snowden doesn’t want to live somewhere he can’t speak freely. It’s because he’s American, meaning accustomed to FREE SPEECH. I hope he’s learning about the rest of the world the hard way now.

I think Snowden did all this because he wanted to be another Assange or Bradley Manning (also, not a hero, people!)

If you know me at all, you know that politically, I lean so far left I can barely stand up straight.  The last thing I am is a flag-waving, tea dumping fool. But when it comes to telling our national secrets, that’s where I draw the line. Particularly useless secrets.

If he were actually exposing something horrible, like that we were about to use chemical weapons or put all the gingers in  concentration camps, then it would be a matter of conscience.

Telling the world shit we already know is not heroism. It’s narcissism.

One thought on “The Edward Snowden Snow-job”