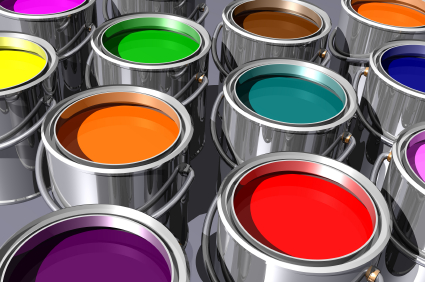 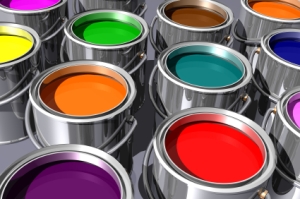 I’m not sure if I mentioned it before, but I’m working part-time for a friend who owns rental houses and apartments. I’ve done some yard work for him and some painting for extra cash.

I’ve learned something about myself — I really enjoy painting! I used to absolutely abhor it. But I figured out it’s not the painting I hate. It’s the prep work and cleanup that makes it miserable. But I can learn to live with that.

First, he asked me to scrape and paint a garage for him at one of his houses. This job was pretty awesome, because it was in the spring and it wasn’t too hot yet. I put on my headphones and rocked. I’m sure the tenants enjoyed looking out their window and watching me dance while I worked.

It took a couple of months because I could only work in the mornings and it rained a lot. But in the end, it was a pretty good job.  I had to endure a  creepy neighbor watching me only once, but then he came and talked to me. He was nice, but it made me a bit conscious when I was working on the side of the garage facing him. Ew. I made sure to have my “don’t talk to me” headphones in.

I wish I still had the pictures I took of the paint job. I saved them to my phone, but they were lost when my phone broke and I had to get a new one. (Thank you, Samsung!)  Next month when I (hopefully) have a tenant in my house I plan to paint my own garage, now that I’m not intimidated by the process.

On to my next project, I painted a tenant’s kitchen. She is a nice retired lady with a lot of spunk. I instantly enjoyed her. We got to know each other while I painted, and we had fun teasing each other about college football. She’s a South Carolina Gamecocks fan (ick) while I’m a Georgia Bulldog. She had a sticker on her door that said, “I eat tiger (and my veggies).” I want that sticker, only without a Gamecock on it. She also had four cats, so I can get along with just about any animal lover.

Anyway, here are a few before pics. 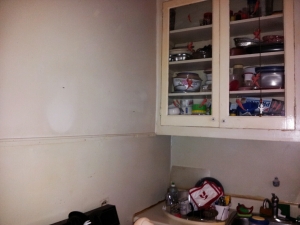 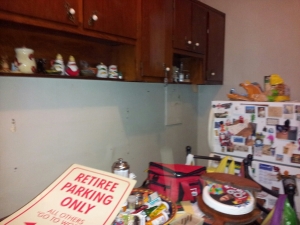 (Sorry for the phone camera images, and the blur!) 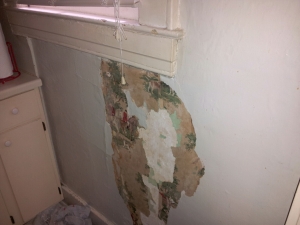 The walls were kind of a battleship gray, which doesn’t make for a very nice kitchen. She had the place fully decorated, though. She’s one of those people who has the walls covered with knick-knacks. I’m not a fan of that style, but to each her own.

I didn’t get very many before pics, and now I wish I had. Oh well.

It took several days and a couple trips to the paint store, but I finally got it done.

The walls are an older Porter Paints color, called Shell (the tenant picked it out). 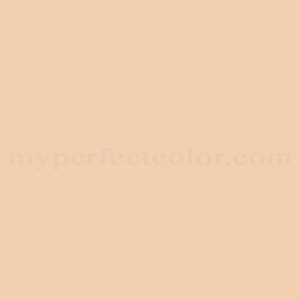 The trim is an off-white from Porter, too.

Porter Paint is a lot more expensive than my usual go-to, Valspar. And I don’t think I like it any better. The first coat didn’t cover as well as I thought it would. What I do like is that they sell paint in quarts, which is handy.

In the end, it looked a million times better, and the tenant was very pleased. She said she would give my name to some of her friends who would like to hire me to paint. 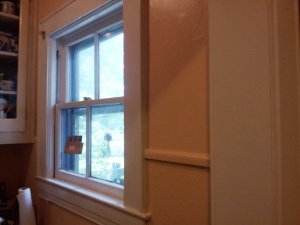 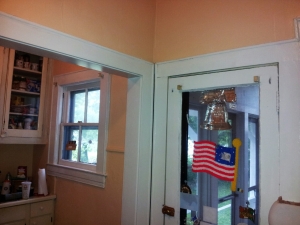 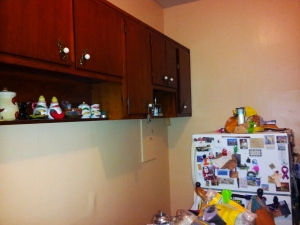 I warned her that I’m not as good as a professional painter, but I also don’t charge as much as a pro. I wish I could find a way to make this my grad-school job in Richmond after I move. If I can get enough work in Louisville, maybe I will feel bold enough to call myself a pro. Eh, we’ll see.