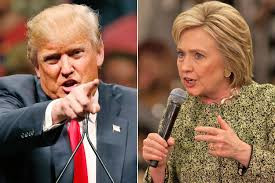 I’ve heard a lot of people complain that there isn’t a good option in this election. Many of my friends who hate both Donald Trump and Hillary Rodham Clinton say they are voting for either Gary Johnson or Jill Stein, neither of which would be a good president and, most important, have NO CHANCE to win.

Many say they can’t in good conscience vote for either candidate. Truthfully, I was never a big Hillary Clinton supporter in the first place. I cast my lot with Bernie Sanders because he shares my values. But Sanders lost. Like it or not, Clinton and Trump are who we have.

If I need someone to babysit my kids for four hours (maybe eight), I have two potential babysitters. One sitter is experienced and friendly with the neighbors, but she’ll probably ignore the kids, eat from the fridge and use my computer to send e-mails. The other potential sitter has never babysat anyone, has a history of losing a lot of toys and screaming at the neighbors, and will likely beat the kids and burn the house down. Also, I’m excited to be able to have a woman babysitter because I’ve only ever had men babysit my kids, and I’m ready to give them a new perspective.

We live in a country that has chosen the two-party system, and as long as that’s in place, most elections require us to hold our noses and vote. “I refuse to vote for the lesser of two evils!” Then don’t vote, because those are your choices. A vote for a third-party candidate (or non-vote) is a vote for the opposite party, whichever side you’re on. Democrats learned that lesson with Ralph Nader, and Republicans learned it with the Tea Party.

Living in a red state, my presidential vote hasn’t counted in years. I just wish the election could be now so we can be done with it. Then I’ll make myself a margarita, sit back and watch the world burn.