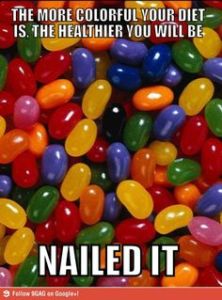 I’m not sure when I became such a fan of jelly beans. They were OK when I was a kid, but they were fraught with horrible licorice-flavored landmines. I’m not sure what fool thought black jelly beans were OK to add to a bag of beans with other delicious flavors (looking at you, Brach’s), but he or she should be flogged. My  Easter Bunny used to dump the jelly beans into the basket so that you had to pick them out of the plastic grass. It was kinda fun, I guess, until they got stale (and I ate them anyway).

I think I became a jelly bean fan when Starburst came out with a line of them. Frankly, now that Starburst has jelly beans, there isn’t much point in the original beans.

Some of you may be thinking, “Whoa! Ahem, Jelly Belly?” Yeah, OK. I’ll give you JBs, but they are too much work. Thinking about which flavors you like and combining them with others might be fun for some. You could call those the Thinking-Man’s Jelly Beans. But I like to just eat my beans — after separating them out by color, of course (note: this is also how I eat my Skittles). Also, who actually needs buttered popcorn-flavored jelly beans? No thanks.

On a recent trip to Target I was caught by a beacon of glorious jelly bean light — an endcap of various flavors of Starburst Jellybeans! OMG! It turns out, other candies have started getting on the jelly bean train, too. Whuuuuut?

I bought them, of course. And I decided it was time for a jelly bean taste-off.

You just can’t go wrong here. Everyone has his or her favorite Starburst flavor, and mine is cherry. But I love them all, really. Green apple, orange, and even lemon. Lemon is my second favorite, so you haters can just hate.

I thought I’d died and gone to heaven. Seriously? JUST the REDS? Yes! On the surface, these are fantastic. But then I realized there were watermelon flavored ones in there. Ick. And not just a few. There are about three watermelons for each cherry or strawberry. Why, Starburst? WHY? I love actual watermelon, but watermelon-flavored candy is disgusting. You fail me, Starburst.

These are pretty good, but really, why bother with the sweet? Just gimme a bag of sour. I hear they make sour-only, but I didn’t see them in my adrenaline-fueled candy-grab. And Sour Cherry is the most delicious flavor Starburst has ever made. Here, you make up for the watermelon fiasco mentioned earlier.

Nope. I didn’t even fool with this mess. Moving along …

Maybe the appeal of Laffy Taffy is the actual taffy (and the bad jokes on the wrappers), but it does not translate into jelly beans. These taste like chewy, flavored chalk. Also, they’re too much work because I have to edit out the banana-flavored ones. These went into the trash.

This concludes my review of candy beans. I didn’t do this all at once, mind you. I’ve been nibbling on them for about a week now, so as not to fall into a diabetic coma. If you would like to read more about candy, check out this excellent book, Candyfreak by  Steve Almond, one of my favorite writers.