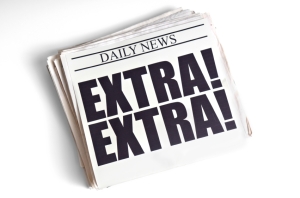 After 17 years (with a couple brief interruptions) in the newspaper business, I’m calling it quits to go to graduate school and study history.

While history may not be the most lucrative field, at least it’s something for which I have a passion. My love for the newspaper industry left a long time ago.

The industry is in a downward spiral. I don’t want to trash my former company specifically because I know the trend is there for all companies. But Gannett is where I gained the experience that pushed me away.

Since last week, Gannett has laid off more than 300 people nationwide, and the Cleveland Plain Dealer laid off 50 in its newsroom. 50. Just in the newsroom.

Morale in the newsroom is the worst I’ve ever seen (and journalists are a grumpy lot). Nobody cares anymore. We want to care. We want to do our best and put out a good product for the readers. But it’s more and more difficult every day.

Being repeatedly beaten down will do that to you.  There was a time when you kept quiet about your job search. You didn’t tell anyone when you had an interview, and if your bosses found out they would be angry. Not anymore. The supervisors know the situation. Most of them are looking, too. Nobody sees a point in hiding it.

For the last five years or so, we’ve all seen the writing on the wall. It’s only recently that the job market has gotten better. Unfortunately, the jobs that are available are mostly entry-level.

Think of it like this: If you’re a bricklayer, you work to build beautiful brick structures, walls and what have you. You take pride in your work, meticulously honing your skills.

Then one day your boss says the company has laid off your fellow bricklayers, and you’ll have less help but you still have to do the same amount of work. So, you do. You still care. (At least they have unions, unlike most journalists.)

Then your boss replaces your tools with the cheapest version, and gives you shoddy bricks and mortar. You still do the job the best you can with what you’ve got. But when your brick wall that you worked so hard (and so fast) to build comes tumbling down, nobody questions the materials, the tools or the staffing. They blame the bricklayer.

So, it’s hard for you, the bricklayer, to give a shit anymore. You know that no matter how hard you work to create a good, solid and beautiful product, in the end, management only wants cheap labor.

When I got laid off two years ago, I was stunned. The Web site I was running was bringing in massive hits, way beyond expectations for our market. I was pretty sure I was safe, though I was afraid I’d be moved into another department, which I desperately didn’t want. In hindsight, being laid off was better than getting into that department.

I was also part of a weekly entertainment magazine that we had built from scratch, and it was wildly popular. We had been told repeatedly by ad reps that we were making money and there was nothing to worry about.

Then the ax came down, and we were called into HR one by one. The hardest part to explain is the anger. It’s not just losing your job. Yes, you worry how you’re going to get by, but that’s normal. Journalists are used to that.

It’s the feeling that all those years when you got yelled at for the smallest things and questioned about why a single event or photo didn’t make it on the Web site … suddenly, those things don’t matter anymore. Last week, the bosses would lose their shit if you made a tiny mistake. This week, “Meh. We don’t need you to do that anymore.” In an instant, the stuff that was THE MOST IMPORTANT THING is now gone. And you think, “Why did I put up with that shit and stress out so much when they were just going to stop caring?”

It’s like they’re saying, “You know all that good work you did for us? Well, we don’t want that anymore.” And that hurts.

But I ultimately came back to the paper, despite my reservations, because I needed a job. I was angry and disgusted by all the dirty things my company had done in the interim. Nothing illegal, at least that I know of, but things that just leave a bad taste in your mouth. Laying people off and bringing them back at lower pay, taking away their benefits and vacation, etc.

But while we in the industry grouse, complain and lament the loss of our dreams, it’s really the public who get shortchanged. They’re still paying for the same size paper but getting less content.

Ken Brusic, editor of the Orange County Register — one of the only papers bucking the trend by hiring people and investing in the product — used this analogy:

“If each day you went into Starbucks and plunked down $4 for a latte, and the cups got smaller and the content got weaker, chances are you’d stop going to Starbucks.”

He’s absolutely right. But the problem is, newspaper management doesn’t get it. They are only concerned about the shareholders. But when people stop subscribing to their local papers, they’ll just say, “Oh, well. Newspapers just died out because of technology.”

Yeah, technology is an issue. But it isn’t the only issue. And it doesn’t have kill the industry. Newspapers are extremely slow to accept change, and this is a constantly changing world.

I remember a few years ago in a meeting when an editor at my paper said, “We’re working on a smartphone app!” Like it was the newest, greatest thing ever.

I pulled my smartphone out of my pocket and looked at all the apps from the local TV stations, national news outlets, etc. “Uh, yeah. Way to stay on top of things,” I thought, shaking my head. (Note: They still have a terrible app. Not a single good review on Google Play.)

Newsprint may be just a dinosaur, and dinosaurs die out. But hopefully, news and good journalism will carry on. And hopefully, those who believe in the work will be able to feed their families. Hopefully.

5 thoughts on “Life (after newspapers) goes on”