I finally finished my bathroom makeover this weekend. It was much more involved than I expected.

The biggest issue was the window in the middle of the shower. In a perfect world, I’d replace the window with glass block. But I don’t have that kind of scratch right now. So instead, I painted the window sill and trim again and put up an acrylic tub surround.

Here’s the before look. 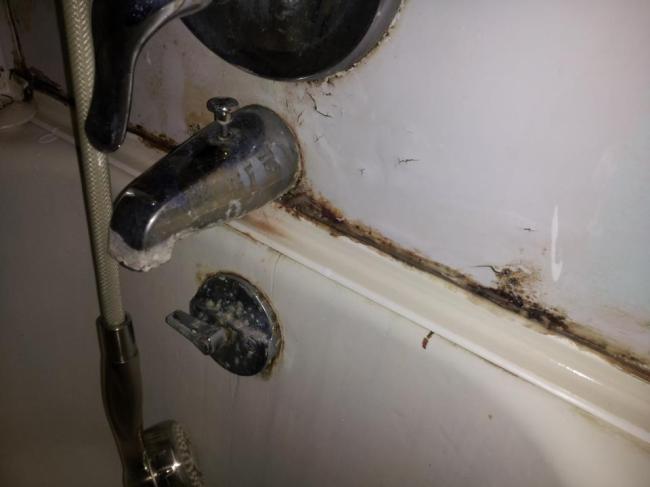 Eeek! Now, before you judge, the condition of this tub does NOT come from my inability to clean. This is bathroom wallboard. It does an OK job, but if it gets even the tiniest scratch, mildew gets inside and you really can’t stop it. Over the years, I’ve tried scrubbing and caulking over it, but it was just an inevitable decline.

(And I did get that gunk off the spout by soaking it in CLR for about a half hour.)

My original dream was to tear it all out, put in a Jacuzzi tub and tile around it. Well, you know. Shit happens. So, since I’m going to try to rent my house out, I thought there was no way anyone would want to take a shower in that mess.

I painted the room Valspar’s Sparkling Lake, and it looked pretty nice. 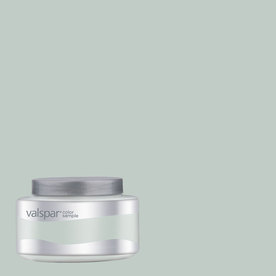 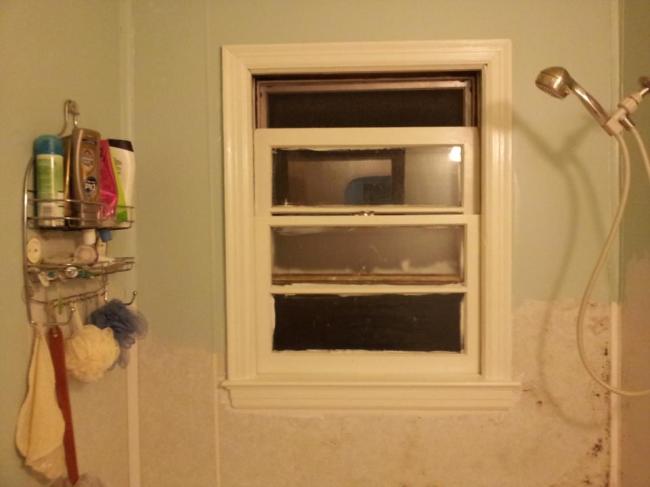 It’s hard to tell the color from these cell phone pictures, so I apologize.

But  it looks much nicer in real life!

Note: I’ve become a big fan of Valspar. They have a paint called Ultra, and it comes with the primer already mixed in. I primed the bathroom anyway because of the extreme moisture in this bathroom. But I still used the Ultra in eggshell, with good results.

Then came the hard part: The tub surround.

I bought a Peerless tub surround from Lowe’s, which I can’t find online now. I got the $100 model not just because I’m cheap (I am), but because it was the best fit. With the window in the back, it would be difficult to cut one of the fancy ones. Besides, some of them have texture made to look like faux tiles, and all I see in that is another place for mold to form. No thanks.

I borrowed my friend Niki’s truck to pick the thing up because one look told me that the box wouldn’t fit in the car.

Then I had my (almost) 79-year-old dad come help me with the rest. I know how to do it, and I figured it would be easy enough. But I’m the WORLD’s WORST at measuring things, so I didn’t trust myself with a $100 outfit that I would only have ONE CHANCE to cut.

First we took the caulk tape off the edge and tried to kill as much mildew as possible. That’s when I took this horrifying pic.

The wood underneath was very soft and useless. But we decided to leave it there because the tub surround walls were flimsy and they  needed some backing.

We measured, did the math and checked it twice. I’m glad he was there because he thought of things that I never would have — such as measuring from the top so that the top of the walls lined up and realizing that the back wall board probably isn’t the exact size of my back wall area.

So, we went out on the back porch and drew it out and cut it with his big snips. We glued that sucker up and made it work. What’s weird is that the tub was not square with the window, but we still somehow made it work. My dad is magical.

Then we put in the corners. But even that wasn’t free of drama. One corner was not square, so we had to find a filler.

We went to a local hardware store to find some sort of shim. We grabbed a strip of wood designed for a trellis (5/8-inch thick?) and glued it up under one side of  the corner piece. (Wish I had photos of that. Sorry!) We tapered with some foil-backed adhesive insulation foam tape or some such. It really worked!

Then we cut the holes for the faucets and such and realized I was running out of glue. Dad took off and I went to Lowe’s (the local placed was closed by then — it was Derby Day in Louisville, after all).

When I got back, I had my son help me glue the two end pieces, then I caulked all the edges and here’s the result.

And there you have it. What a beaut!  I took a shower in it today and was amazed by all the white! I haven’t felt so clean in years. I also feel very much like a badass, too.

Oh, and I did watch the Derby, albeit on the replay when I got back from Lowe’s. Ah well. The horse I had in my office pool came in 11th, I think. I had much better luck with the remodel.